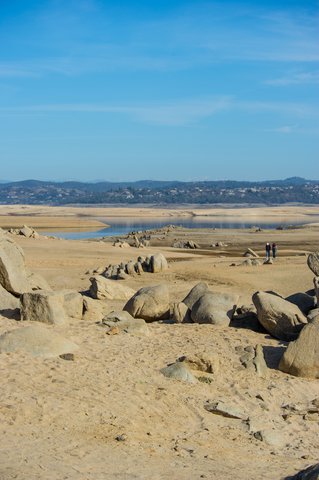 Today is the start of the new year which means everything to California,

And judging by the numbers we start with, we could end up in uncharted waters, assuming there is enough left to navigate.

This date, October 1, marks the start of a new water year.

If you say ho-hum, then you’ve never been dry, you’ve never seen an orchard in its early years of production wither into stick skeletons, or you’ve had the joy of saving the machine. wash and bath water to flush your toilet.

Since many of us are cavaliers when using water and never had to worry about the water not flowing out of the tap; the following numbers may mean little or nothing. But for those who manage what is arguably California’s most crucial resource, like South San Joaquin Irrigation District General Manager Peter Rietkerk, these are numbers that could lead to sleepless nights in the months to come. .

The Oroville Dam, which is the backbone of the State Water Project and is California’s second largest reservoir with a capacity of 3.5 million acre-feet, is in worse shape. It was at 36% of average capacity as of September 30. A year ago it was 45% and in 2019 it was 102%.

The trend is not encouraging. A repeat of the past year of water which is one of the five driest since records began to be kept 15 years ago with the same amount of water used would be devastating.

This would essentially dry up or create dead pools where water trapped behind dams cannot be released into the 8th and 11th largest reservoirs in the country.

Most Californians seem to take a “don’t worry, be happy” attitude towards water. Since there is still flowing water for watering lawns, watering sidewalks and the like – which is currently illegal in all towns north of the San Joaquin Valley – and ornamental fountains flowing, there is no there is no crisis, is there?

Droughts, however, are disasters that slowly creep up on you. And by the time you finally face the fact that you are in big trouble, it is too late. You cannot conserve the water that you have carelessly wasted. Once it drains from the faucet for pretty much whatever it’s used for, it’s gone.

Those who trust nature are doing well this year are a bit reckless.

Ratings based on over 750 years of hydrology mean more than the current debate on climate change. And those odds are even more against us than playing the California lottery.

It is more than a little alarming that Gov. Gavin Newsom has yet to declare a statewide drought emergency including Los Angeles and San Diego, or impose mandatory cuts, choosing instead to call for the compliance of volunteers to reduce water consumption by 15%.

Since 93.9% of California is in severe drought, including the Los Angeles Basin which must depend on water imported from other basins to meet almost all of its needs in a normal year and in the worst drought conditions, Newsom plays Russian roulette.

No one should blame Newsom for the drought. But if he fails to curb now when it comes to further reducing water use through warrants that result in hefty fines for non-compliance by essentially crossing his fingers, the Water Year we start today will be normal or almost normal, it basically passes an opportunity to prevent a bad situation from becoming a serious economic emergency and even a public health emergency.

If you are one of those who thinks the drought we live in cannot get worse, you might want to watch the signs.

Besides reservoirs such as the 2 million acre San Luis Reservoir along Highway 152 below the Pacheco Pass 60 miles southwest of Manteca which is currently at 27% of its average capacity at the Today, you can see the stress in the trees that are not dependent on seepage. watered lawns.

Signs of severe mixing problems can be seen in the upper Stanislaus River watershed on the western slope of Sonora Peak at 11,459 feet from the scarcity of wildflowers and how dry the soil is from light watering from ‘been who have all but disappeared over the past two years.

A third dry year which has a high probability of occurring based on past hydrology which clearly indicates that the mid-17th century through mid-19th century is unusually wet in what is called today the western United States could easily go into the fourth, fifth and longest years of drought.

Besides becoming extremely troublesome, food prices will skyrocket because you will need water to grow them. Those who assume we can just import food forget that other parts of the world are also in drought.

They join others who simply believe that we can tap into neighboring states’ water supplies without realizing that we have been doing so for years and that the drought in the Colorado River Basin is just as severe as the drought. that we know in California.

Those who harbor such thoughts have been lulled into the assumption that we can somehow control nature and that Apple, Google, etc., are going to save us all in one way or another. .

And while the SSJID reservoirs are in better condition, relatively speaking, than most others in the state, Sacramento is already in search of water despite the district and Tri-Dam project partner Oakdale Irrigation District legally holding the front of the water supply rights to the first 600,000 acre-feet of snow runoff on an annual basis in the Stanislaus River watershed.

That’s why SSJID and OID have joined other water agencies to fight the state in court over the recent Sacramento Executive Order. agencies.

Sacramento clearly wants it both ways.

They want to act as if there is no emergency requiring a mandatory reduction in everyone’s water use so as not to create political ill will among voters.

Yet at the same time, they’re so worried about being able to maintain minimum fish flows that they’ve embarked on the most cheeky and massive water intake in California history.

Obviously, there was no champagne to usher in the new water year that began today.

This column is the opinion of the editor, Dennis Wyatt, and does not necessarily represent the opinions of The Bulletin or 209 Multimedia. He can be contacted at [email protected]